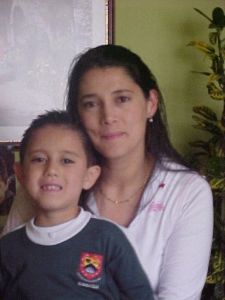 (The following testimonial letter was translated from Spanish.)

As believers in God, we are are sure that Carao was an answer sent by the Lord in response to our prayers.  For more than 2 years, David had been taking Prednizolona, in relatively large doses (up to 20 mg. daily) for a child of his age (4 years) and when the dosage was reduced (following the doctors' instructions) the autoimmune hemolytic anemia reappeared.  On 4 occasions, David required blood transfusions.

When he started taking Carao, he immediately began to improve.  He regained a healthy skin color, and he once again became an active child, with appetite, and above all, very happy!  (Note by Lloyd: he did not receive any more cortisone.)

The hemoglobin level stabilized, the reticules came down to normal levels, and all the blood values began to normalize.

from another email to me months later: Before David (my son) started taking it he had been on and tried many different medicines he got from the doctor.  None of these medicines worked so I looked for an alternative.  Carao was recommended to me by my sister and it worked wonders.  David took it every day for 6 months approx and it was like a miracle.  Everyday the doctors tested his hemogloben and each day it went up.  After six months his level was above average and was able to stop taking any medicine, including carao.  A year has now passed (he celebrates his 8th birthdayt tomorrow!) and he is perfectly well.  I only ensure now that he eats a well-balanced  diet including lots of fruit and vegetables.

God bless Lloyd Standish and the Carao.  Note: We can send blood test results for both before and after carao to those who wish to verify the information.