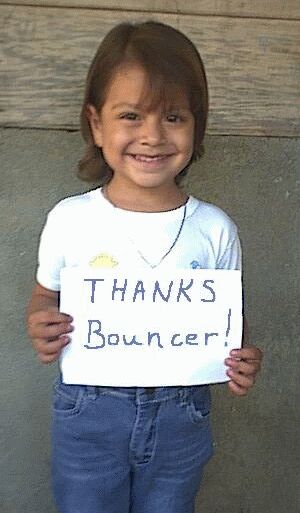 Carao for Severe Anemia in an Infant

This is a remarkable story of recovery from chronic lifelong anemia.  Testimonial by mother Digna:

"Keisy was born with anemia.  I also had anemia since before she was born, and she seemed to have inherited it.

The doctors tried giving her iron, but it did not cure the anemia.  She just lay there in her crib and slept nearly all the time.

The iron caused her fingernails to deteriorate, and gave her indigestion.  The doctors had no solutions, so I stopped giving her the iron.  At least then she would eat a little more.  The anemia was so bad that it caused her growth to be stunted, and she was not developing mentally.

I have a friend Marielos who told me that you made carao extract, and she gave me some that you had given to her.  Carao is known as a natural cure for anemia, but I did not believe in it.  I gave it to Keisy anyway, however.  Keisy was sleeping almost constantly, but I got her to take drops of it off a spoon.

Three days later Keisy was out of her crib and crawling around on the floor!  We were amazed.  We continued to give her the carao extract, which she loved.  Marielos provided us with it from what you gave her.

My husband and I want to thank you for all you've done for Keisy with your wonderful carao extract."

I asked Digna if her doctor in Liberia, (Guanacaste, Costa Rica) was aware of Keisy's recovery and if he could make a statement.  She talked to him, and reported the following to me:

"My doctor said to me, 'I know carao was responsible for curing your daughter's anemia.  I would like to make a public statement, but right now only iron and folic acid are officially recognized.' "

Keisy also received Tropical Wonder Carao donated by a young athlete in the US nicknamed "Bouncer."  I got Keisy to pose for the picture with a "thanks Bouncer" sign.  Wherever you are, Bouncer, I send my thanks too.

Digna's (Keisy's mother's) hemoglobin went from 8.5 to 11.8 after taking carao.  The 11.8 figure was from a test made after 2 months of no carao.  I made a donation to her recently in hopes of boosting her up to the normal hemoglobin range (12-15).

(Update 6/2007: Keisy is now completely free of anemia, with blood values in the normal range.)